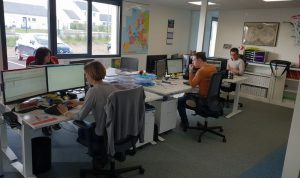 ED-TRANS’s Nantes Agency has installed new facilities as it continues to develop. “Following NTL France’s acquisition by ED-TRANS, we decided to bring our two teams together on one site and modernise the infrastructure to generate synergies,” explains Cécile Jacquemin, Director of ED-TRANS‘s Nantes Agency.

With 250m² of office space, a 350m² warehouse and three bays to accommodate NTL France’s trailers, this physical merger of two recognised transport players in the Nantes area (and more widely, western France as a whole) now gives NTL France the means to pursue its ambitions. The acquisition of this new shared facility is fully in line with ED-TRANS’s strategic thrust and its five sites across France.

Expertise on the road